IS INNOVATION DEAD -- Part I?

To pose the question is to betray a concern that it is. But what do we really know about this and how do we know that what we know is accurate? Where would we look? Why would we care to know?
Stop and look around you. What do you see? A computer, undoubtedly – desktop or laptop. Devices powered by electricity (again, including the computer), probably a TV set, fancy kitchen appliances, maybe there’s a bottle or two of some prescription medications at hand; you are living (or staying) inside a building of some kind, possibly designed and built within the past 10 years, using building materials that are lighter, cheaper and less durable than any that have ever existed. Maybe you have a bowl of genetically engineered popcorn (prepared in the microwave) on your desk. As you sit up straight, you remember that you have two titanium vertebrae in your spine, and a couple of spinal screws as well. None of this existed (or was even speculated about) when your parents were born. Innovation – creation, invention, call it what you will, brought all these things to (or into) you.
Sometimes it’s fun to look back and assess the impact of innovation, or what the conversations of and about innovation have looked like:
• Think of all of the things invented between 1875 and 1925 – it’s staggering, really – radio, television, automobiles, powered flight, the skyscraper, the elevator; things we depend on all showed up in a relatively short period of time;
• Go back a little bit further and ponder this – how has the “speed limit” for human beings evolved? Not the posted limit on the Interstate, but how have we operated in relation to speed? Look at it like this –-
• From the beginning of time until we figured out how to ride on the backs of animals or had them pull our vehicles – 30 mph.
• From that indistinct time in the remote past when we figured that out until we harnessed steam to power a locomotive – 60 mph.
• From 1820 or so until we invented automobiles, that’s where we were, and then we boosted that speed limit with the internal combustion engine and got up over 100 mph; with piston driven aircraft, it got up to 300 mph or so.
• When we got up to jet aircraft engines, we moved on up again, through the sound barrier, not once but multiple times from the early 1940’s to the mid-1950s, we got up to 4,000 mph or so with rocket powered winged aircraft.
• Then, in 1961, human beings escaped the earth’s gravity – then the speed limit shot up to 17,000 mph.
• And then, in 1968, when we went to the neighborhood of the moon we bumped it up again to 25,000 mph.
• And we’re holding there….

• How about this one? In 1795, the head of the British Patent Office advocated shutting down, because “everything that can be invented has been invented.” Right.

In the law school class that I teach, we cover a couple of cases that deal with, broadly speaking, how license grants should be interpreted. The cases suggest that, whoever you are, the law will favor you if you are more, rather than less, explicit as to the rights you want to have, or sell to others, or reserve for yourself. Leaving things general leaves to chance whether a granting clause will be construed for you or against you. Sometimes, being explicit means specifying – or at least negotiating for, and trying to get – rights that might not yet exist or might not yet be commonly handed out. For example, in a license agreement struck in 1930, would you expect the grant to cover “television broadcast” rights? No, probably not. Why not? Would it be because television broadcasting did not yet exist? Maybe, but television, as an experimental “gadget” actually did exist by 1930. Would you, in a music license agreement written in 1969, have thought to specify rights covering “video cassettes”? Again, maybe not, but videotape certainly did exist in 1969, but there was no ability to use, much less define a market for, a consumer-affordable, home-use, video playback device.
So, I asked my class to speculate – imagine they were negotiating for a writer granting exploitation rights – what would they want to specify, given that if they failed to do so, they might disadvantage their client. They came up with some interesting ideas, but nothing really “off the wall” or so strikingly unanticipated that you could call it a breakthrough. (Nothing like imagining the inside of your eyelids as a theatre screen on which movies could be projected; nothing like a subcutaneous implant that could receive wireless signals and transmit them, neurally, into the vision center of your brain, and yet both of these phenomena have been tossed around in the pages of speculative fiction – what we used to call “science fiction.”)
This kind of thing takes practice.
So, is innovation dead? No, it isn’t. But we ordinary, non-technical, folks tend to leave it to the experts, with whom we don’t converse much. So, if there’s innovation going on, we don’t hear about it until it’s pretty far down the line and shows up in the popular media.
What is there to do? Get on top of what’s being said and written about in the realm of new discovery. There’s a lot to know and there’s a lot more we don’t know. We just have to keep looking.

Bears Land a Real Quarterback -- Will it Matter? 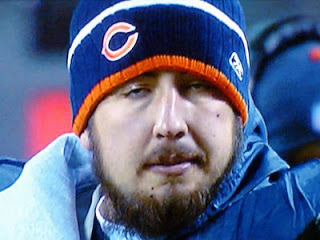 How about those Bears?  That's Jay Cutler, over there; the Bears' latest best hope to actually have a real quarterback playing the position.  Remember Sid Luckman?  No?  Ask your father, er, grandfather.  There's a chance. .....
So that's the guy he is replacing over there....Kyle Orton.  Not his best picture, probably; guessing he was having a bad day, or the flash made him blink, or, he was sleep deprived, or......(Gosh, I'm starting to sound like one of the Bears coaches.)
A friend asked if I was surprised that Jerry Angelo would make a move as bold as this one seemed to be; I answered that I was totally surprised he would do something this unexpected in light of the "Kyle is our quarterback" declarations.  So I guess it's like politics -- never believe anything publicly uttered until it's denied.
But the real story here is this: it IS ok to get excited that the Bears now have Orlando Pace, a real-deal, no kidding O lineman who will make any quarterback look good (ok, better).  (His picture is way up top, left.)
But take this to the bank:  given the lousy use to which Bears have put their recent draft choices, it's like they paid for Cutler -- a quality player, in all likelihood -- with Confederate money.
Old Man Halas would have been proud.
Posted by SAM FIFER at 10:47 AM No comments:

Jake DeSantis's New York Times Op-Ed piece, an open letter to his boss, Ed Liddy, was a well-reasoned, long-needed, voice from the other side of the great economic divide.  If you have not read it, STOP and read it now.  There are so many places to look here -- DeSantis's argument for the sanctity of contract; his assertion that his boss disappointed him by promising him (and others) a "carrot" at the other end of the "stick" and then potentially yanking the carrot back; the lack of understanding of what "bonus" in the financial industry really means.
It should be required reading.
http://www.nytimes.com/2009/03/25/opinion/25desantis.html
Posted by SAM FIFER at 2:38 PM No comments: